A two hour flight from London to A Coruña on Spain’s North West Galician coast, followed by a two hour drive along a modern motorway brings you to the centre of the Bierzo wine region.

Bierzo D.O covers about 3,000 km2 and is located in the north western corner of the province of Leon, close to the border with Galicia. It’s a fairly new D.O having been created in 1989, yet the viticulture in the area is far older than that.

As with most European wine regions, Bierzo has strict rules about what grapes can go into it’s wines. Ignoring the nitty gritty, the rules can be summed up in one word, Mencía. Mencía is native to North West Spain, I’m sure other areas of the world are experimenting with it, but I’ve not discovered any. A red grape, it is quite similar in taste to Cabernet Franc, producing light bodied, red fruit dominated wines with a herbaceous, herbal undertone. The similarities between it and Cabernet Franc are so strong that it was thought to be a clone until recent DNA testing proved it to be a distinct variety.

As well as being home to vineyards of irregularly planted old Mencía bush vines, the hillsides of  Bierzo are dotted with monasteries perched upon rocky outcrops and there are also dozens of Roman ruins throughout the region. The name Bierzo itself has Roman routes. One of the most breathtaking places to visit is Las Medulas in the south of the region. This UNESCO World Heritage Site is a vast landscape of bright orange stone pillars which were created by the Romans flooding the entire area to wash out gold within the rock. It was also the Romans that introduced viticulture to Bierzo before the monasteries of the middle ages  took up the mantle and expanded the vine growing area. Today, 18% of the region is covered in vines. 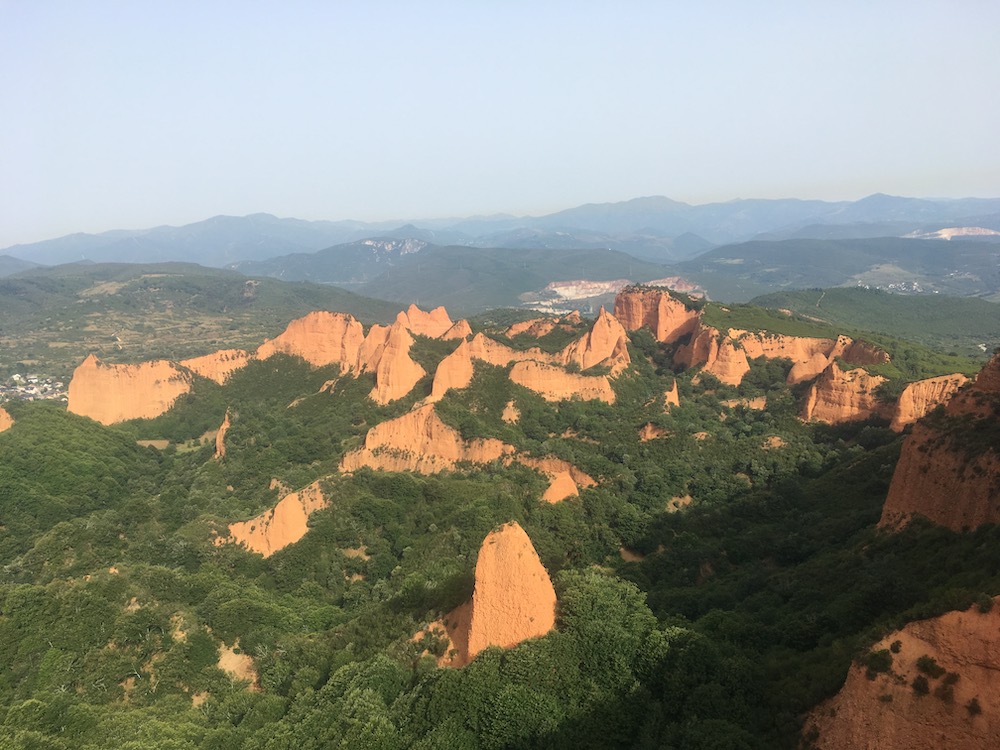 The main town in Bierzo is Ponferrada, however I stayed in the charming smaller town of Cacabelos, mainly because the Bierzo tourist website listed several wineries or Bodegas that would be open to visitors in the town; there were indeed a number of Bodegas clearly signposted, however they were all firmly shut up and those that were open seemed surprised that anyone would want to visit them.  Even the local tourist office seemed confused by my request for potential places to visit, just handing over one flyer for Cuatro Pasos, part of Galician giant Martin Codax.

The contrast between this area and more established wine regions that I have visited in Europe couldn’t have been starker. Nonetheless, I was bowled over by the warmth and generosity of everyone we met, although, unlike other areas of Spain, English is not commonly spoken and I’m sad to say that my Spanish is basic at best. This was demonstrated quite clearly at Cuatro Pasos where I could only be offered a tour in Spanish, due to the lack of demand for an English tour. Unperturbed I joined the tour, picking out the odd word, with the friendly guide Sheila, doing her very best to summarise for me  in English where possible.

Cuatro Pasos, named after four black bear footprints discovered one morning in the vineyards, is unlike any winery I’ve visited before. I’m used to seeing big modern wineries situated in the middle of the vineyard or rustic farmhouses with no neighbours for miles; yet Cuatro Pasos was hidden behind an inconspicuous wooden door down a narrow cobbled street in the town centre. Inside was a huge chamber, delightfully cool given it’s metre thick ancient stone walls. The room was large enough to house half a dozen modern stainless steel fermentation tanks together with a rectangular concrete 88,000l tank which can no longer be used as it’s coated inside with a paintnow banned by the Government.

Cuatro Pasos solely make wines with Mencía. Given the concrete shutdown, all of the wines are fermented in stainless steel before being aged for varying amounts of time in new or almost new French oak. There is such a thing as Galician oak, but the majority of Bierzo producers appear to favour the French option despite it’s cost. As I visited in August, they had sold through the majority of last year’s releases leaving just two wines to taste. The Pizaros de Otero and core wine, Cuatro Pasos. The later was sourced from higher altitude, older vineyards and had been aged for slightly longer in oak; the result was a complex wine offering more structure, sweeter tannins and added spice compared to its little brother. There was also more black fruit nuances rather than the red fruit dominant in young Mencía. 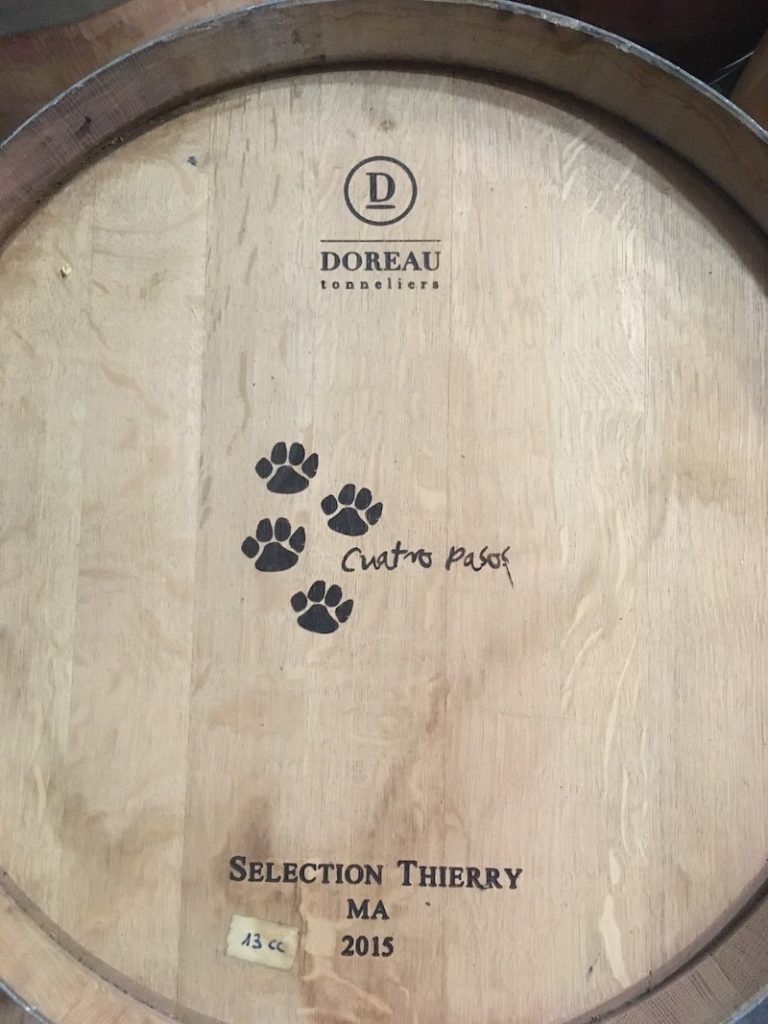 As seems to be the trend around the globe, I found that altitude plays a big part in Bierzo winemaking; vinification of different altitude grapes is common as the higher altitude provides a greater diurnal range leading to wines that are rich and complex whilst maintaining a freshness of character.  However, with the higher altitude comes the higher price and Cuatro Pasos’ premium wine Martin Sarmiento comes from their highest and oldest vineyards.

The warmth and generosity of the people really came to the fore following the visit to Cuatro Pasos. Realising that I wanted to learn more but was struggling to find any accommodating wineries, Sheila picked up the phone to her friend Natasha at Pittacum located just up the road in the village of Arganza. Natasha very generously opened the winery up especially for me on her day off for a fantastic tour.  London born and bred, Natasha had swapped a high flying professional career to move back to her parents’ home village of Arganza to help them during their later years. Falling in love with the place, she decided to relocate permanently; taking up a job organising tours at Pittacum as well as running free weekly English lessons for the locals.

Pittacum is a fairly new winery having been founded in 1998; it’s named after a Roman urn, or Pittacum, a fragment of which was found in the grounds of the winery building. The building, like Cuatro Pasos, is another beautiful old stone building, which had functioned in the past as several different enterprises, including a distillery. Now part of the Terras Guarda group of wineries, it is slowly but surely being refurbished. It houses a stunning  tasting room as well as being a wedding venue; you can get married in front of of a tumbledown dovecote with the vineyards climbing up into the hills behind – beautiful!

The majority of Bierzo vineyards are split into tiny plots which  are passed down family lines in complex inheritance procedures. As a result, a lot of wineries, including Pittacum, don’t own many of their own vines and are instead reliant on a network of local growers. Pittacum work closely with the growers throughout the year, ensuring all abide by their mantra of “personality, reliability and quality”.  There is a real diversity to the landscape here with many  different soil types, varying aspects and altitudes and microclimates. Accordingly there is a lot of interest in plot by plot vinification to showcase these different terroirs. It felt almost Burgundian in this aspect. Indeed in 2016, the Bierzo wine regulators passed new labelling regulations allowing wines to be labelled as regional, village (vino de paraje) or single vineyard (Cru). One of Pittacum’s premium wines highlights this to great effect, Aurea is made solely with the grapes from the Finca Areixola vineyard whose vines are over 110 years old. The usual premium winemaking practices apply, low yield, hand harvesting etc. When the 2017 vintage is released in a few years’ time, they will be able to label it under the new Cru label.

As well as four Mencía wines, Pittacum also make a wine from Garnacha Tintorera (the local name for Alicante Bouschet, a child of Grenache) called La Prohibición in a dig at the strict D.O Bierzo rules which force them to bottle the wine under a generic Castilla Y Leon label.

Both Cuatro Pasos and Pittacum are part of larger winery groups who are aware of the interest in and the benefits of wine tourism. Whilst I am sure that there are other wineries in Bierzo with this outlook, Natasha said that her attempts to set up a dedicated wine tour with other local wineries had been rebuffed. That evening I went to one of Natasha’s english lessons to meet some locals. There seemed to be some disbelief that I would come all of the way from England to try the wine. When we asked about wine tourism the general consensus was one of “why would people come here when they could go to Rioja? We’re two hours from the nearest airport”.  It’s easy to feel that they are missing a trick – the Camino de Santiago, the world famous pilgrim route, passes through Cacabelos, indeed it goes right past the door of Cuatro Pasos, and the Roman ruins also bring in the tourists; the weekend after I stayed, thousands of Roman re-enactors were due to descend on the town – these are just two groups of potential customers who are definitely working up a thirst!

Mencía is an alluring and unusual grape. Given the increasing popularity of wines with a sense of place I don’t think it will be long before we see more of it in the UK.  Perhaps it already has a cult following; the top wines of Descendientes de J Palacios, one of Bierzo’s early pioneers, are exchanging hands on the secondary market for close to £1000, you can pick up cheaper Bordeaux first growths! Despite this oddity the majority of Menica is fantastic value for money, and a very versatile food wine. In Cacabelos octopus was the accompanying food of choice, but I don’t think it would be a bad choice to go with the Christmas Turkey.  Perhaps with increased exports the Bierzo wineries will open up more. I hope they do. The region offers stunning landscapes, fascinating history and gorgeous food – I’ll certainly be going back for more.